How To Remove Mould From Your Student Accommodation

Students, I hear you, you want to remove mould from your bathroom. I’ve been there:

The problem is that it doesn’t just look disgusting, mould can have adverse effects on your health.

Mould Grows Without A Conscience!

It will grow almost anywhere, and unfortunately for students, a lot of landlords are either far too busy to deal with it properly or just don’t care. In my first year, the ceiling was painted twice and the tiles were scrubbed thoroughly. The story was the same in my second and third year housing, but again and again we had a mouldy bathroom.

With all the exams, revision and partying, your bathroom needs to be a place where you can unwind – and are not afraid to touch the walls. Hopefully this is where I can help.

In my experience, every time the ceiling was painted and the tiles were cleaned, the grout remained mouldy. No matter what we did it wouldn’t come off. Our landlord always said that it was too expensive to replace the tile grout or buy some mould treatment chemicals. Not to mention, it would put the bathroom out of action for ages. Not an option for a house of 7 people.

So we suffered through it. But you don’t have to.

I wish I had known that grout pens existed when I was at University! Seriously, they are your best option.

Once you or your landlord have cleaned the mould from the tiles and repainted the ceiling, grout pens offer a cheap alternative to regrouting that will refresh your bathroom and help prevent the mould from coming back.

Not just cheap – easy to use too

If your Landlord won’t clean it for you, then you’re in luck.

With a grout pen, you simply give the tiles and grout a quick wipe over to get rid of the surface mould, drying it with a towel afterwards. Then, remove the lid, take out your mould anger by pumping the pen furiously (which doubles as priming your pen), and get covering up that unsightly mould.

All you have to do is follow the grout with the pen, making sure you give it a good pump as you go.  Just check out our results below. 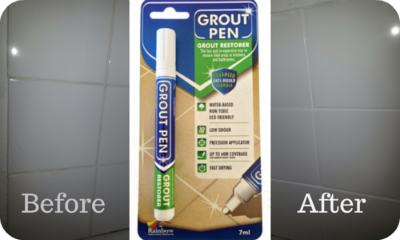 We go into further details about how to use a grout pen here, though it’s really not rocket science.

Within a few hours the bathroom will be ready to use again!

Rainbow Grout Pens even contain an anti-mould agent that helps to prevent that mould from coming back.

Remove Mould With A Grout Pen

Grab one of our pens now, click here to check our grout pen product page, or to see our selection of nib sizes and colours, choose nib size and colour in our product selection boxs below.

Does Chalk Paint Have To Be Waxed?

Upcycling is still a huge part of the DIY revolution. But whether you’re an upcycling connoisseur or a complete newbie, you may find that you have some questions that need answering. Chalk paint is a…

The Best Product To Write On Glass Temporarily

This blog post was last updated on 15/01/2021. Look no further for an effective way to write on glass to entertain the kids at home, or increase the social media coverage and footfall for your…

Christmas is all about spending time with your family and loved ones – and creating your own fun Christmas crafts provides a much-needed break from all of the lockdown technology use in 2020! Christmas is…

Dear customers: COVID-19 (Coronavirus) has affected the delivery times. Please accept there may be delays with new orders. Dismiss